Tour can begin here or at Sachems’ Plain 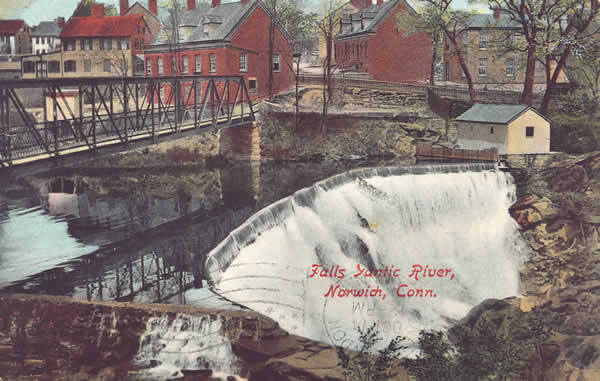 On September 17th, 1643 The Battle of the Sachem’s Plain (now known as the Great Plain) brought Narragansett and Mohegan warriors to Yantic Falls, a popular Mohegan fishing and gathering place. Narragansett and Mohegan runners chased one another to a chasm that overlooks the Yantic River. Uncas sent his fastest runner, Tantaquidgeon to apprehend the Narragansett Sachem Miantonomo, who was weighed down by a gift of English armor. According to tribal tradition only a Sachem can capture another Sachem. Abiding by this tribal protocol, Tantaquidgeon thus held Miantonomo until Uncas’s arrival. Uncas made the long jump across the chasm, which at that time, was narrower before modern-day erosion. Some warriors failed to reach the other side, falling to their deaths on the rocks below.

Following the Mohegan capture of Sachem Miantonomo in The Battle of the Sachem’s Plain, the English court at Hartford declared that Miantonomo would be executed. They hoped this would quell Miantanomo’s advocacy for a united Native resistance against the English.  Miantonomo’s movement, if successful, would have strongly challenged English aspirations for expansion and governance within the region.

A monument commemorating Sachem Miantonomo stands on a hill on Elijah Street off Boswell Avenue in Norwich.

After the death of Miantonomo, Narragansetts besieged the Mohegans at the fortified village of Uncas’ at Shantok in the spring of 1645.  When the Narragansetts could not penetrate the stockade, the Mohegans were left with the choice to either starve or surrender.

Toward the end of the siege, the Narragansett Medicine Man perched in a tree outside of the palisade taunted the Mohegans inside.  The Mohegans, having had enough of the taunting, started shooting at the man in the tree.  He easily shielded himself.  Then the Mohegan medicine man came in sight of the man in the tree and showed him a single musket ball. He lifted the ball to his mouth, and swallowed it.  Moments later he pulled the ball from his navel.  He did this three times, then loaded the musket with his enchanted musket ball and shot the Narragansett out of the tree.

Under cover of darkness, Uncas’ English ally, Thomas Leffingwell, approached the fort in a boat on the Thames River and hoisted a side of beef and other provisions into the Mohegan camp. This ensured the Mohegans would not starve. The siege was broken.

The village of Uncas is a part of Fort Shantok Park.  Fort Shantok was taken by the State of Connecticut in the early part of the 20th century.  In 1994 the Mohegan Tribe purchased the Park back from the state.  It includes about 160 acres and was declared a National Historic Landmark in 1993.  Now a part of the Mohegan reservation, the property includes a burial ground for Mohegans, both ancient and modern.