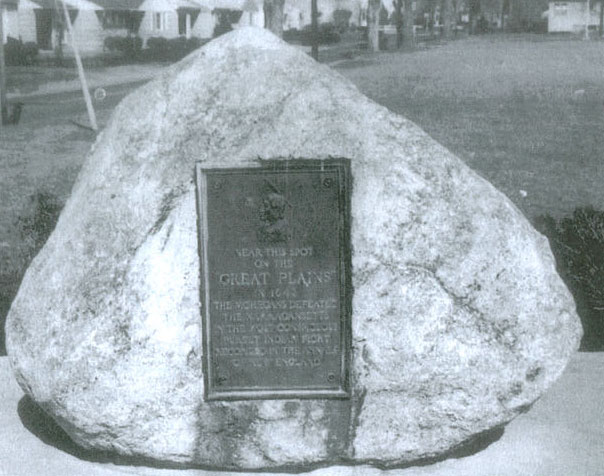 Uncas/Wôks (meaning Fox) was a Mohegan Sachem/Sôcum or head chief who lived from 1598-1683. Sachem Uncas and his Mohegan people were closely related to all the tribes of southern New England as the leaders often sent their sons and daughters to marry the leaders of other tribes, forging extensive blood and kinship ties between neighboring peoples and nations. The region’s indigenous balance of power experienced difficult pressures in the 1600’s. Newly arrived Dutch, French and English colonists and corporate entities attempted to insert themselves into alliances, in efforts to obtain land and resources, as well as to introduce different forms of spirituality. These stresses – combined with devastating epidemic diseases that struck Native populations hard – fed growing disagreements about how best to handle changing circumstances among tribal nations.  Violence sometimes resulted.  In the aftermath of the Pequot Massacre of 1637, intertribal relationships changed significantly. The situation between the Mohegans and Narragansett became violent when the two Sachems met with their warriors on The Sachem’s Plain (also known as The Great Plain) in Norwich on September 17, 1643. Uncas asked Miantonomo to fight one-on-one. But Miantonomo, who was accompanied by a superior force of warriors, refused. Anticipating this possibility, Uncas fell to the ground – a pre-arranged signal to his warriors to attack. The Mohegans let a barrage of arrows fly, which surprised the Narragansett. The battle that ensued is one of the last in this area using only indigenous weapons.