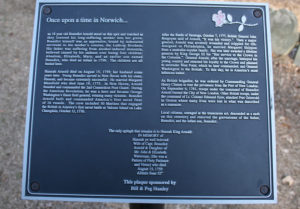 Follow the trail into the Old Norwichtown Cemetery, and cross the bridge to the left.  Head uphill to find a modern plaque atop a black metal stanchion, designating the grave of Hannah Waterman King Arnold, the mother of Benedict Arnold.

Born in the Bean Hill section of Norwich to John and Elizabeth (nee Lathrop) Waterman, Hannah’s first husband, Captain Absalom King, was a wealthy merchant who died at sea in 1732.  A year later, Hannah Waterman King married again, this time to Benedict Arnold III, a grandson of an early Rhode Island governor, of the same name.  Following Captain King’s death, Benedict (III) who had worked as a cooper, ship-owner, and sea-captain with Captain King, grew close to the grieving widow – and after their marriage, the Arnolds had six children – two of whom were named Benedict (IV in 1738, who died in infancy), and (V in 1741) – [the infamous traitor, who before switching sides during the Revolutionary War, was General Washington’s finest field general. It’s a VERY complex story that scholars and historians are still trying to sort-out.] 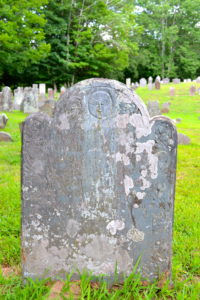 Shortly after Hannah and Benedict III were married, market downturns caused hardships in the family finances.  Compounded by the early deaths of their children, Mr. Arnold (III) descended into alcoholism and depression.  After years of heartbreak, and grieving from family disruptions and untimely deaths, Hannah Arnold died on August 15, 1758, and her husband, Benedict III died in 1761. They were both interred in the Old Norwichtown Burial Ground.

Mercifully, she did not live to see her once-lauded son, Major General Benedict Arnold (V), betray the cause of American independence in 1781.  In September of that year, then-British Brigadier General Benedict Arnold commanded Crown forces as they attacked and burned New London.  Across the Thames River in Groton, after the patriot defenders at Fort Griswold surrendered, British soldiers conducted a horrendous massacre of over 90 men.  When the news of this reached Norwich, a mob of outraged citizens descended on the Old Norwichtown Burial Ground, and removed the gravestones of Hannah’s husband, Benedict III, and the infant son, Benedict IV.  Hannah’s is the only grave still standing with the Arnold name in that cemetery.

Click below to listen to “Hannah Arnold’s Grave” Song