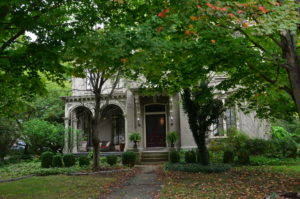 It was New England’s textile industry’s great fortune that Leonard Ballou (1794–1880) opted out of a planned career in teaching in favor of developing his skills as a cotton miller. A brilliant technician and businessman, Ballou built his first production empire in Killingly, Connecticut, where a section of town called Ballouville recalls his influential presence there. Ballou earned a name for honesty and fair dealings among his partners and employees.

If Ballou was a modern man, his Washington Street residence epitomized a modernizing age, when mechanized technology was allowing for more complicated rooflines, larger panes of glass, and elaborate trimmings like those on this house—all of which were mass produced.