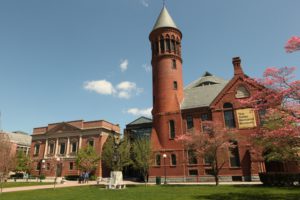 In 1853 the Rev. John P. Gulliver, founder of the Norwich Free Academy, approached the wealthy citizens of Norwich to establish a school that ensured even students of the most modest backgrounds would be eligible for a superior education. Raising $75,000, nearly every resident of the Millionaires’ Triangle played a role in the founding and development of this independent institution, intended to serve students regardless of social class and gender—a progressive mission that holds true to this day. NFA has produced a legacy of prestigious alumni, including Edwin H. Land (1909 –91), inventor of the Polaroid camera and film; sculptor Bela Lyon Pratt, best known for his full-sized bronze of U.S. hero Nathan Hale (1867 –1917); and bestselling author Wally Lamb (b.1950 -).

In 1865 Lafayette Sabine Foster (1806–80) was unanimously elected president pro tempore of the U.S. Senate, and upon President Lincoln’s assassination, became the country’s acting vice president. Had the simultaneous attempt on Vice Pres. Andrew Johnson’s life gone forward as planned on April 14, 1865, Foster would have become U.S. president. As acting vice president, Foster was appointed to the Doolittle Congressional Committee to investigate conditions of Native American tribes and their treatment by the U.S. military. While traveling in the American West he befriended famed frontiersman, Kit Carson. When in Norwich, this rising political star made his home in this stately mansion, a fine example of an Italianate villa. Contemporary tastemakers defined the distinctive type, often embellished with a tower and cupola, as the desired “country house of a person of competence or wealth sufficient to build and maintain it with some taste and elegance.” The original house has been enlarged on the south side and at the rear and has been incorporated into the Norwich Free Academy campus. Foster later became a justice of the Connecticut Supreme Court and served as the first president of the New London County Historical Society and as a trustee of NFA. He is buried with his family in the Yantic Cemetery on Lafayette Street. 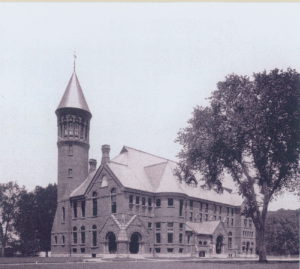 This exuberant Romanesque Revival campus landmark, built of red brick with sandstone trim, was the bequest of William A. Slater (1857–1919), noted businessman and philanthropist, in memory of his father John Fox Slater (1815–84); see also #21. Both Slaters proudly carried the family legacy of the illustrious textile manufacturer Samuel Slater (1768–1835) of Pawtucket, Rhode Island. Samuel Slater is considered the father of the American Industrial Revolution for his introduction of automated mass-production methods for weaving textiles based on prototypes in his native England. 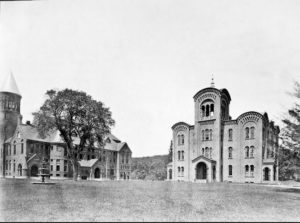 John Fox Slater, nephew of Samuel, followed in his family’s footsteps as a renowned textile manufacturer and president of Ponemah Mills, which made cotton goods and fine fabrics in the Taftville section of town. In 1882 Slater donated a million dollars to his newly established John F. Slater Fund for the Education of Southern Freedmen to provide schooling for emancipated slaves. Over thirty-six colleges in the South benefitted from Slater’s philanthropy.

The 1886 NFA building honoring this progressive benefactor, who helped endow the school, is the work of Stephen C. Earle (1839–1913), noted architect of Worcester Polytechnic Institute campus in Worcester, Massachusetts, among many other collegiate projects, and the designer of the nearby Park Congregational Church (#22). The museum houses ancient Greek and Roman plaster casts, an extensive Asian art collection, historic Norwich paintings, and is one of only two museums located on a high school campus in the country.