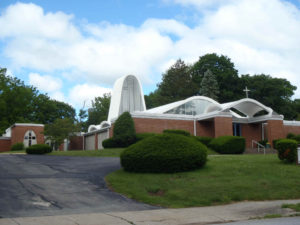 This property was once the site of a mansion owned by Charles and Ada Richards. Charles Lewis Richards (1831–83) began his career running a ship’s chandlery in the Sandwich Islands and operated a packet boat line between Honolulu and San Francisco. He returned to Norwich from California in 1867 and became a real estate investor.

Richards knew from the moment he saw Ada Louise Pollard (1848–1922) that she would be his wife. Spotting her strolling along Broadway, he remarked to a companion, “I’m going to marry her.” Richards was right: In 1868, the couple wed and they had six children. After raising her children alone following her husband’s death, Ada pursued other interests and became vice president of the United Workers in 1906.