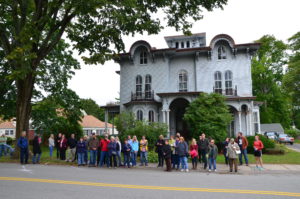 Moses Pierce (1808–1900) established the Norwich Bleaching, Calendaring and Dyeing mill for processing textiles in the Greeneville section of Norwich in 1840. In the 1860s he helped organize the Occum Water Power Company to tap the stupendous waterpower generated by the Shetucket River—ultimately allowing the Ponemah Mills in the Taftville section to become one of the largest cotton manufacturers under one roof in the world.

In 1873 Pierce donated his former residence in Norwichtown to the United Workers, a public health agency, to be used as an orphanage known as the Rock Nook Home for Children (77 East Town Street). Pierce’s interest in education led to roles as trustee and original incorporator of the Norwich Free Academy. His will stipulated that income from his investments be used to establish the Edwin Milman Pierce Fund for training educators to teach industrial arts to African Americans in the South.

The Pierce residence is somewhat unusual for an Italianate villa of its size, as it was built of wood rather than the more expensive masonry favored for other houses of its period in the neighborhood. Rounded dormers, iron cresting, and ornate brackets nevertheless make it a standout. Pierce moved here in 1873, married his second wife Anna Holbrook Pierce in 1886, and stayed until 1889.