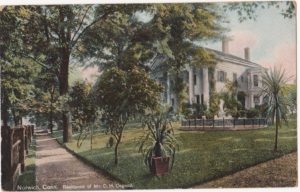 This historic congregation, organized in 1883 by a group of primarily eastern European Jews living in Norwich, had several homes before building this modern brick synagogue in 1966. The property is the former site of a mansion belonging to Dr. Charles Osgood (1809–1881), his wife Sarah Smith Larned Osgood, and their four children. A one-time Norwich mayor, Osgood began his career as a physician, but made his fortune as a drug manufacturer and wholesaler. He developed a national reputation selling patent medicines with intriguing names like Dr. Osgood’s India Cholagogue, marketed as a remedy for fever and other symptoms now associated with malaria. There remains little sign of the Osgoods’ gardens, once renowned for their tropical plants. Fortunately, an impressive cast-iron fountain, decorated with a sea nymph and serpents, has been saved and relocated: Look for it on the campus of the Norwich Free Academy (#3).