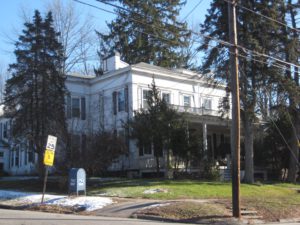 James S. Carew (1821–81)—merchant, manufacturer, and dabbler in local politics—was serving as mayor of Norwich at the outbreak of the Civil War. By 1870 he was owner of the Hayward Rubber Company, maker of rubber shoes and boots. Carew shared this grand residence with his wife Leonie Grandjean Carew and their two children. Some of the popularity of its Greek Revival style is credited to the American identification with the ancient Greek system of democracy. The house’s striking Doric colonnade is the descendant of Greek temples.