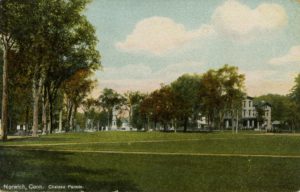 This triangular park was given to the city by landowners in the vicinity, who were hoping to improve the value of their own real estate by turning a derelict lot into an elegant public space. Donors stipulated that it remain free of buildings and “nuisances” in perpetuity. The name “parade” may derive from the custom of strolling (dressed in one’s finest) here, and/or to the park’s occasional use for military displays (#4). “Chelsea” possibly referred to the fine residential district in London of the same name. Placement of the Civil War Soldiers’ Monument (1879) and World War I Howitzer Monument (1920) at the park’s north end reflects the New England tradition of using town greens to honor war dead. Look for the 1889 watering trough once used by horses which was moved from downtown’s Franklin Square. 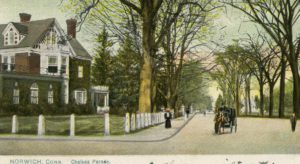