Start at the corner of School Street and Fountain Street 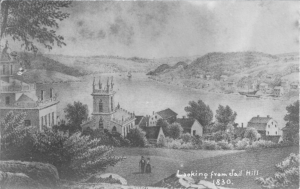 Jail Hill is a historically working-class neighborhood, perched on a steep incline overlooking the downtown and the harbor. The name refers to the area’s history as the former location of the county jail, built atop the hill in 1833. As you wander the district, which includes Cedar, Fountain, Happy, John, Old Division, and School Streets, you will see houses dating from 1828 to 1914. Because the jail’s presence depressed property values, the city’s poorer citizens, African Americans in particular, were able to afford homes here than in other parts of Norwich. Many of these families were active in the local anti-slavery movement. Following the Civil War, descendants of Jail Hill’s early settlers, including members of the Williams and Harris families, relocated to southern states to open schools, support suffrage efforts, and otherwise provide aid to newly freed slaves during Reconstruction.

By the mid-1800s, Jail Hill’s original black population transitioned to Irish, reflecting the rapid growth of Norwich’s immigrant population during the potato famines of the 1840s. Today, the district retains a strong sense of community, and the residents take pride in the history of their neighborhood—a place where African Americans struggled to better their own lives and champion black equality elsewhere in the country. In honor of its cultural and architectural significance, the neighborhood was listed on the National Register of Historic Places in 1999.