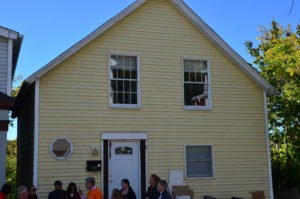 James Lindsey. Smith was born into bondage in Heathsville, Virginia. Trained as a shoemaker, he escaped from slavery with two friends in 1838. Crossing Chesapeake Bay in a sailing canoe, the fugitives made their way to New Castle, Delaware where they took a steamboat to Philadelphia. There, local abolitionists sent Smith to David Ruggles (Stop 1) in New York City. Ruggles arranged for Smith to stay with a Congregational minister in Springfield, Massachusetts. After attending Wilbraham Academy, Smith married Emeline Minerva Platt in 1842 and settled in Norwich. He worked as a shoemaker in Franklin Square located downtown. He was also a founding member of the African Methodist Episcopal Zion church, where he served as a minister. The couple’s daughters, Louise Amelia and Emma J. I. Smith, graduated from Norwich Free Academy. They became teachers in Washington, D.C. following the Civil War. In 1881, Smith published a remarkable memoir detailing the hardships and cruelty he experienced while enslaved and both the kindness and discrimination he encountered in the North. Copies for sale are available at Norwich’s Leffingwell House Museum.