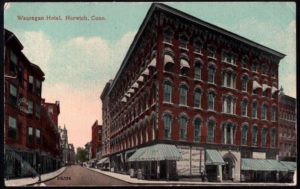 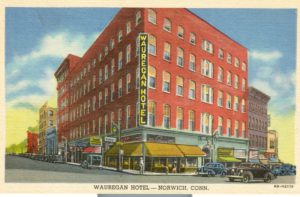 In 1860, presidential candidate, Abraham Lincoln was in Connecticut to support William A. Buckingham’s re-election as governor. On March 9, he spoke at the old Norwich City Hall Stop 10). Afterwards, he met informally with residents in the gentlemen’s parlor on the second floor of the hotel, then one of the finest inns between Boston and New York. Many believe he slept in one of its lavishly appointed rooms before leaving town early the following morning. Lincoln’s visit energized many of the city’s Wide Awakes, a Republican club for young men, and The Norwich Bulletin reported that the presidential hopeful “was received upon his entrance in the hall with storms of applause, loud and prolonged; and when he was introduced, the enthusiasm of the audience knew no bounds.” Lincoln used his appearance at New York’s Cooper Union and his subsequent tour of New England as an opportunity to build support for his dark-horse candidacy at the Republican National Convention in May 1860 in Chicago.

When the hotel annexed a neighboring building in 1894, the impressive corner landmark gained a new dining room and ballroom. The building’s elaborate Italianate-style window lintels, originally made from cast iron, were stripped off the building in the 1940s to provide scrap metal for the war effort. Some 130 years after Lincoln’s speech, the brick building stood vacant and derelict. Renovation, which involved recreating its signature lintels, has produced seventy modern apartments and new retail space on the ground floor.