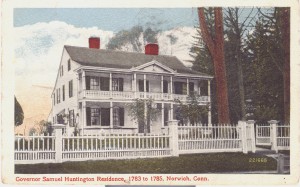 Samuel Huntington was born in Scotland, CT in 1731 and practiced law with Reverend Ebenezer Devotion. Huntington moved to Norwich to practice law and  married Devotion’s daughter, Martha, in 1761. The Huntington Home is located in the current United Community and Family Services administration building on East Town Street. The couple did not have any children of their own, but adopted a niece and nephew when Huntington’s brother and sister-in-law died. Huntington’s nephew, Samuel H. Huntington, went on to become the 3rd Governor of Ohio.

Huntington was described as “dignified…and reserved in popular intercourse,” but “in the domestic setting…pleasing and communicative.” Huntington served as a delegate to the Continental Congress and signed the Declaration of Independence and the Articles of Confederation. In 1779, he was appointed the first President of the United States under the Articles of Confederation and later served as a State Chief Justice and Governor of Connecticut. He died in office as Connecticut’s 18th Governor in 1796 and he is buried in the Old Burying Grounds in Norwich alongside Martha. The home is in the twin chimney, center hall style, although several circa 1900 changes are apparent.