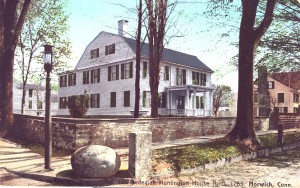 Jedediah Huntington was born in 1743 the son of General Jabez Huntington. He graduated from Harvard in 1763 and was appointed Colonel of Connecticut’s 8th regiment. He received the rank of Major General upon the war’s conclusion. He participated in many battles including the siege of Boston in 1775, the Battle of Bunker Hill, the Battle of Ridgefield and endured the hardships of Valley Forge. He married and had one son with Faith Trumbull, daughter of Connecticut’s Revolutionary War Governor Jonathan Trumbull and sister of painter John Trumbull. Faith witnessed the gruesome Battle of Bunker Hill and the fear of losing her family members to the brutality of war caused her to take her own life. In 1778, Jedediah married Ann Moore and the couple had several children.

Jedediah hosted his father-in-law, Governor John Trumbull, and General George Washington for dinner when General Washington passed through Norwich in April of 1776. Jedediah was a member of the court martial of General Charles Lee and sat on the Court of Enquiry at the trial of British Major John Andre who conspired with Major General Benedict Arnold to betray West Point to the British. After the Revolutionary War, Jedediah moved to New London and became the Collector of Customs until his death in 1818. His remains are interred in the Huntington family tomb in Norwich.

General Ebenezer was the fourth son of General Jabez Huntington. He was within two months of completing his degree at Yale College when the Battle of Bunker Hill erupted. He and other patriots withdrew from school and enlisted in the Continental Army. Huntington quickly rose through the ranks in the army and was a colonel by the end of the war. He participated in many military engagements and he witnessed the surrender of General Cornwallis at Yorktown in 1781. Huntington stayed with the army until it was disbanded in 1783. After the war, Huntington held many titles, including Major General of the Connecticut Militia, Brigadier General of the US Army during the quasi war with France and he was elected twice as a Connecticut state representative. Huntington died on June 17, 1834 at the age of 80. He was noted for his “fine manly form”and “military deportment.”

This is one of the most imposing 18th century houses in Norwich; a fine two and half story, gambrel roofed, twin chimney, center hall style.