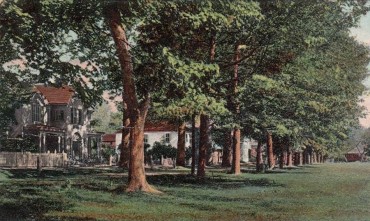 Jesse Brown’s house was a licensed tavern and stagecoach shop in 1790. It was famous for fine dinners boasting delicacies from Boston and Hartford. According to the Norwich Packet, President John Adams dined here on August 1, 1797. In 1814, Captain Bela Peck bought the tavern and lived there until his death in 1850. Soon after, Moses Pierce donated the building to the United Workers to be used as a home for poor children known as the “Rock Nook Home.” Today, it is the home of the United Community and Family Services, the successor organization of the United Workers. This structure is in the Federal style, probably originating as a center hall twin chimney plan and has been greatly altered twice during the 19th century.