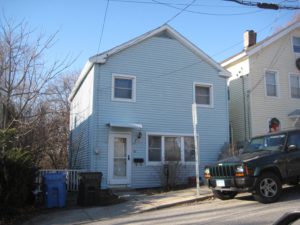 This vernacular Greek Revival – style house was owned by Elisha Williams, an African American who made his living as a cook. The Williams were active abolitionists and among the first families to settle on Jail Hill. Elisha’s brother, Thomas Williams, a carpenter, lived nearby at 43 Fountain Street. Among other family members, Pelluman Williams served as president of the 1849 Connecticut Convention of Colored Men, and George Williams attended the convention as a delegate. A handwriting teacher, Pelluman Williams married Mary Harris, who attended Prudence Crandall’s school in Canterbury (Stop 9). During the Civil War, the couple moved to New Orleans to teach former slaves.